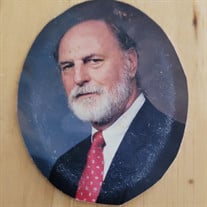 Don Carey passed away peacefully on April 23, 2022 at The Retreat, SAAD Hospice in Mobile, Alabama. Born January 9, 1938, in Kenwick, Kentucky, he was the son of the late James Clarence and Geneva Carey. After graduating from Lafayette High School in Lexington, Kentucky, he joined the US Army and served in the Korean War. He began a lifelong career with IBM in a new plant start up producing electric typewriters in Lexington, Kentucky. During his career with IBM, he worked in Boulder, Colorado, Austin, Texas, and in the startup of a plant in Boca Raton, Florida, producing personal computers. He finished his career in Research Triangle Park in Raleigh, North Carolina. Don retired to Dauphin Island, Alabama, where he volunteered at numerous charities, especially enjoying chaperoning groups at Mobile ARC on their outings. He actively pursued his lifelong hobby of collecting, driving and showing his cars. Don was a true animal lover and will be remembered by many for his absolute love of dogs, especially his favorite, Mardi. He is survived by his wife Eugenia Pierson Carey, twin sons Gregory Alan (Wendy), and Jeffrey Lynn (Patricia), three granddaughters, and five great-grandchildren all in Kentucky. Additionally, he is survived by two sisters, Patricia Haddix, Lexington, Kentucky, and Lynette Highlander, Baltimore, Maryland. A Celebration of Life will be held at a later date. Arrangements are under the direction of Cottage Hill Memorial Funeral Home, Mobile, Alabama. Memorial donations may be made to Dauphin Island Bird Sanctuaries, Post Office Box 1295, Dauphin Island, Alabama, 36528 or St. Jude Children’s Hospital, st.Jude.org.

Don Carey passed away peacefully on April 23, 2022 at The Retreat, SAAD Hospice in Mobile, Alabama. Born January 9, 1938, in Kenwick, Kentucky, he was the son of the late James Clarence and Geneva Carey. After graduating from Lafayette High... View Obituary & Service Information

The family of Mr. James Donald (Don) Carey created this Life Tributes page to make it easy to share your memories.

Send flowers to the Carey family.