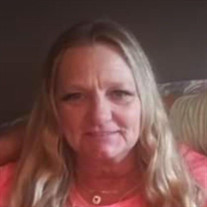 Sherry Lynn Parnell was born on February 9, 1966 in Mobile Al. Sherry Lynn passed away into the arms of God on August 14, 2021. She was the most giving person that you could have ever met. She would give until she had nothing left to give. She... View Obituary & Service Information

The family of Mrs Sherry Lynn Parnell created this Life Tributes page to make it easy to share your memories.

Send flowers to the Parnell family.